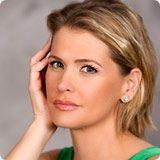 Kristy Swanson is probably best known for her starring role in the Twentieth Century Fox feature film, Buffy the Vampire Slayer. The film remains a cult classic to this day and was spun off into the popular WB television series Buffy. Swanson began her professional career at the age of nine working in television commercials. By the time she was 13, she had more than 30 commercials to her credit, and had landed her first television series, “Dreamfinders,” for the Disney Channel. Swanson went on to star in a long list of films that include: Flowers in the Attic with Academy Award-winning actress Louis Fletcher, Hot Shots with Charlie Sheen, The Program with James Caan, The Phantom opposite Billy Zane and Eight Heads in a Duffle Bag, starring Joe Pesci and David Spade. Tackling her most controversial role, Swanson portrayed a college student discovering her sexuality in John Singleton’s film, Higher Learning. Swanson has a long list of guest-starring television appearances to her credit. Most recently she has appeared in episodes of Just Shoot Me!, CSI: Miami anxd Law & Order: Criminal Intent. Swanson appeared in Dude, Where’s My Car where she portrayed Christie Boner and Swanson co-starred with Adam Sandler in the summer blockbuster comedy, “Big Daddy.”

In this episode Alycia talks with Kristy about the effect of playing such an iconic character that has transcended through the decades. They also talk about what it takes to make it in the industry, and her thoughts on how the business has changed since she first started out- Listen In Below!