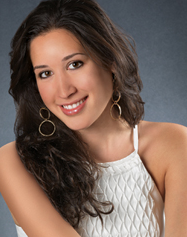 back in February to talk about her career as a designer just before the launch of Fashion Week. Alycia was so impressed with Danielle’s entrepreneurship, which started at such a young age. Danielle DiFerdinando spoke at the 2nd Annual Women’s Empowerment Summit as an inspiration to young entrepreneurs everywhere. Danielle even did a spotlight feature on Alyica! Here is Danielle’s story:

Danielle DiFerdinando of Danielle Nicole Handbags always loved design and she experimented sketching and making handbags while still a high school student in the Baltimore area. After moving to New York City to attend the Fashion Institute of Technology, Danielle landed an internship at Bergdorf Goodman. While there, the cosmetic buyer asked Danielle to design a line of cosmetic bags. The success of the line was instantaneous and she was subsequently asked to design a complete collection for the prominent department store. Orders from other department and specialty stores such as Neiman Marcus, Saks Fifth Avenue, Lane Crawford, Holt Renfrew, and Nordstrom soon followed. Since the launch of her company in 2006, Danielle Nicole has seen a tremendous amount of success. This past fall, Danielle was chosen to produce 5,500 bags for Oprah’s highly anticipated “O You” event, where her famous “Sydney Shopper” tote was used as the official gift bag. Danielle Nicole handbags have been seen in publications such as Elle, People, Lucky, Harper’s Bazaar, The New York Times, and have been featured on NBC’s “Today” show. Danielle appeared on “The Real Housewives of DC” during a fashion show at Saks Fifth avenue that featured Danielle Nicole handbags on each model on the runway. She has also given on-camera interviews with news Channel 8, “Let’s Talk Live” in Washington, D.C. and Virginia, and WJZ Channel 13 in Baltimore, MD. Recently, she was invited to speak at the Wharton School of Business on the topic of young entrepreneurship. Danielle Nicole Handbags can be found online at www.danielle-nicole.com, as well as in retail locations around the world including Macy’s, Lord & Taylor, Nordstrom, Harvey Nichols, Saks in Mexico City and Coin in Italy.

← Don’t be afraid of the speed bumps in lifeJudith R. King attending the 2013 NYCWES →