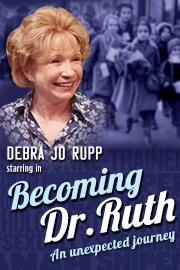 The It Factor Productions on how the Play Became

Alycia Kaback and The It Factor Productions is pleased to announce they are joining Theatre Producer, Pat Addiss once again in backing another amazing play. Dr. Ruth Westheimer, the sex therapist, met Martin Rayner the actor who portrayed Sigmund Freud in Freud’s Last Session by Mark St. Germain. Who knew how seminal that chance encounter would become?

A few months later Rayner asked to see Dr. Ruth in her office. At first she thought he had a problem.

Instead Mr. Rayner wanted to hear more about her relatively unknown past before establishing herself as the most famous and blunt-talking sex therapist. Here are the top ten facts you should know about Dr. Ruth.

7. She studied psychology in France.

5. She is fluent in 4 languages: German, Hebrew, French and English.

4. She is a certified “Swiss House Maid.”

1. She is currently single and out on the town every night.

And now, thanks in part to Mr. Rayner, she is the subject of the play, “Becoming Dr. Ruth” by St. Germain, a one-woman show starring Debra Jo Rupp of That 70’s Show Fame.

Where to see The It Factor Productions Backed Play about Dr. Ruth

Becoming Dr. Ruth takes place a few weeks after the death of her husband, Fred Westheimer, in 1997, as she packs up her apartment and tells her life story. Sex takes a back seat in Mr. St. Germain’s script, Dr. Ruth is “responding to sexual situations throughout,” he said to the NY Times, “but if that’s all the play was about, it wouldn’t be a play.” The themes involve managing the subtler clash between sadness and humor.

Here’s Dr. Ruth with the cast of the first It-Factor-Backed Play, Vanya Sonia Masha and Spike, which won the Tony Award for Best Play, click here.